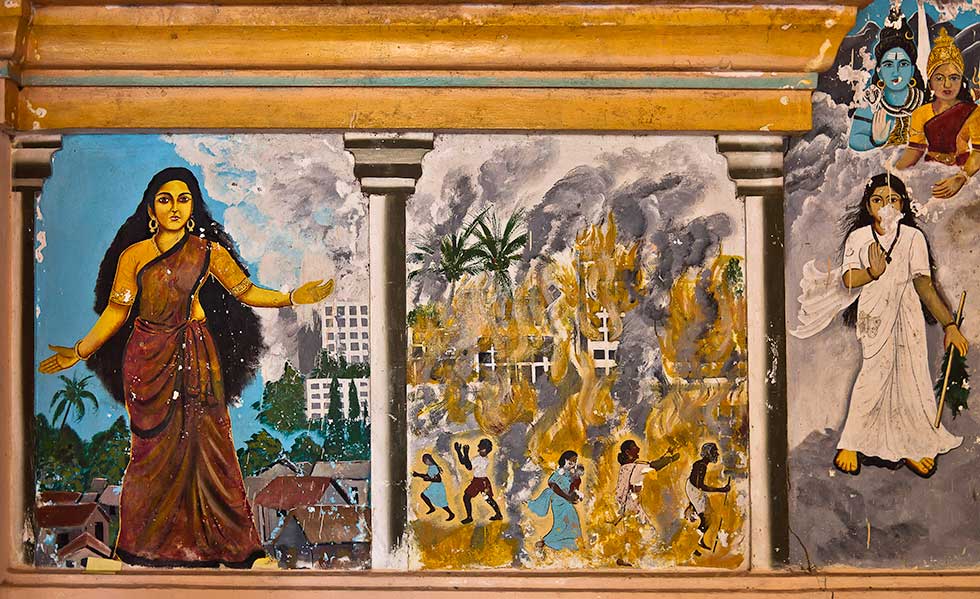 Pattini, which means ‘faithful and chaste wife’ in Sanskrit, is worshipped in her original form of Kannaki/Kannakai Amman or Mother, the fearless protagonist of the South Indian epic Silappadikaram (The Tale of an Anklet), by Sri Lankan Hindus, particularly in the island’s eastern and northern regions. Devotees in these regions believe that Kannaki, after destroying the city of Madurai in retribution for the execution of her husband falsely accused of stealing the Queen’s anklet, crossed over to Lanka in order to cool down and visited two places in the north and seven places in the east of the island, all of which now have important kovils (temples) to Kannaki Amman (see also http://www.dailynews.lk/2001/pix/PrintPage.asp?REF=/2010/10/12/fea09.asp).

Not surprisingly, there are many claims and counter-claims regarding the specific sites in the North and East that were visited by Kannaki. Some devotees in the North claim that Kannaki first stepped onto Lankan soil at Jambukola Pattinam (now Sambuturai) and rested at Sudumalai (the Kannaki kovil here has been re-named Bhuwaneshwari Amman Kovil) and Mattuvil (site of the renowned Panrithalachi Kannaki Amman Kovil) before heading East. Other devotees believe that Kannaki, broken hearted at Kovalan’s second betrayal (after she pieced together his body parts, sewed them up and brought him back to life, he arose uttering Madhavi’s name), assumed the form of a five-headed Naga (cobra) and sought sanctuary in Lanka. She first stopped at Nainateevu and then proceeded to Seerani, Anganam Kadawai, Alavetti and Suruvil (interestingly, this route incorporates sites where shrines to Naga deities currently exist). Another group of devotees, while agreeing that Kannaki first arrived in Nainativu in the form of a cobra, insist that she then proceeded to Kopay, Mattuvil, Velambirai, Kachchai, Nagar Koil, Puliyampokkanai and finally, Vattrappalai.